The Winter Solstice brought a fresh wave of changes for me.

On December 21st in the morning I received notice that my PayPal account was being limited because I appeared to be operating as a non-profit organization because I mentioned some of the funds from payments received being donated by me to charity. Well I had to explain to PayPal that I was not sending all funds over to charity, that my business was an individual small business and not a non-profit organization. So I followed their instructions and sent my appeal. I never heard back on December 21st. Completely stressed out at the prospect of losing one of my only funding sources for my business, I decided to turn to what I liked to do: network. So by magic during the day I met the Iparte.com creator Ron & Julia. We established a connection and ended up exchanging links on each other's social networks. It was really great to do that, uniting us as One more and more. That evening, I received intense hara, heart, throat, minds eye, crown, and hand chakra activations, followed by a closer connection to my higher self, along with an energy wave. It was all definitely divine guided.

My mom sent my family a Christmas package on November 12th priority mail. Typically it arrives in one to two weeks. Well I ended up getting it on December 22nd. I still did not have a response back from PayPal and part of my appeal included my administrator password so they could see my entire website to make sure I was following the rules. I gave it to them cautiously. They had the power to delete my network and remove my business' funding source. I hope I never have to do that again. I prayed and prayed, asking for the limitations on my account to be removed. I prayed hard to AA Michael to protect me and restore my account, the answer from him was "you are perfectly protected, have faith". It was just me and my faith in God, my whole world was torn away. Without my payment processor and my admin account, my business was just torn away from me. Then I waited, no response. I called them, they said they were still reviewing. I was hoping they weren't changing anything, I was getting worried. While I waited, I called about a Christmas present of mine which was a custom frame of my daughter's charcoal caricature drawing. Well my frame still wasn't done for Christmas when it was supposed to be done, I started getting emotional and kept reminding myself it was a test of faith and patience. Finally I got a phone call, confirming PayPal completed my review and my account was returned to good standing.

I expressed my gratitude immeditately to AA Michael and the masters. After that I immediately changed my administrator password at the City of Shamballa. That night, feeling better, I helped a friend out to purify Michael Sroke from PA who recently passed away. He was apparently not in the light and haunting people on Earth. I invoked Medicine Buddha to purify him, and AA Michael to escort him into the Light. He was stubborn, he was clinging to Earth (earthbound), but through all the effort, he eventually decided for the Light. In the end, he was wearing a white robe and said thank you as he was entering the City of Shamballa finally free.

The next day on December 23rd, my daughter's framed picture was ready for pick up, just in time for Christmas.

Well it has been quite a roller coaster ride, but thanks to God, all is well. I wish you and your family Happy Holidays and a Prosperous New Year.

Copyright © Chris Comish. http://www.cityofshamballa.net/
This may be shared freely, as long as this text remains intact.
Posted by Chris Comish at 3:30 PM 1 comment: 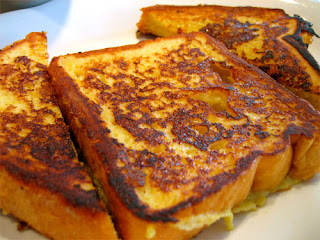 As we move into the Holiday Season, I wanted to share a recipe for French Toast that my family and I enjoy for breakast. This is a little different than my usual topics, but I wanted to post this to share with all of you.

Use thick slices of toast/sandwich bread. You will need a measuring cup that uses American measurements or you can convert the measurements to metric easily online.

Combine ingredients until you have a smooth mixture in the bowl.

Get a large frying pan, place it on the stove top and add cooking oil (I prefer natural sunflower or olive oil) in the pan. Once the oil is warm, take a slice of bread and briefly dip both sides of the bread into the mixture. The bread does not need to be dipped more than a few seconds on each side. Place the bread slice in the frying pan. Cook each side. Once slightly golden brown/yellow, it is ready to be served. Repeat, until you have enough French toast slices for breakfast. Sprinkle on lightly confectioner's/baker's sugar on each slice if you wish. You may add maple syrup or other favorite topping.


Copyright © Chris Comish. http://www.cityofshamballa.net/
This may be shared freely, as long as this text remains intact.
Posted by Chris Comish at 10:41 AM No comments:

To all Members of the City of Shamballa:

Merry Christmas and Happy Holidays to all!

I wish to extend my warmest greetings to each one of you and your families. This season of celebrations is a time of eager anticipation, joyful get-togethers, and being with loved ones.

Please remember those who will not be with their loved ones during this holiday season. Consider participating in programs established to help them, giving to a local charity, or simply offering a prayer for them. Reach out to those who may be experiencing pain during the holidays.

We, as a community, are so very thankful for and inspired by the many community members working to help make The City of Shamballa a better place. Thank you to everyone for your contributions to the community.

I wish you a safe, enjoyable holiday season and a prosperous New Year.


Copyright © Chris Comish. http://www.cityofshamballa.net/
This may be shared freely, as long as this text remains intact.
Posted by Chris Comish at 11:44 PM No comments:

Email ThisBlogThis!Share to TwitterShare to FacebookShare to Pinterest
Labels: holidays

Member of the Month at City of Shamballa

Members of the Month are selected from the featured members of the City of Shamballa. Members that contribute regularly with blog posts, discussions, events, videos etc are featured.

Wishing all of you many blessings and thank you for being members of the City of Shamballa.


Copyright © Chris Comish. http://www.cityofshamballa.net/
This may be shared freely, as long as this text remains intact.
Posted by Chris Comish at 4:52 AM 1 comment:

Translate This Page To: